What Does It Mean When a Dog Eats Grass? 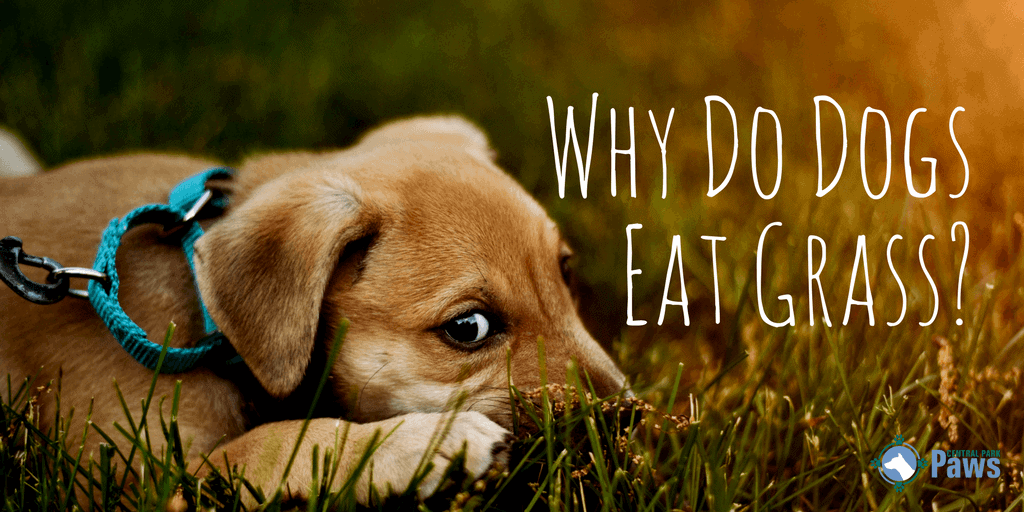 Why Do Dogs Eat Grass?

“This is Shasta. She’s a vegan”

That was the simple introduction made by my hubby as he placed the little blue-eyed husky mix – cleverly disguised as a ball of fur with giant ears and a pink tongue – into my open arms.  Through the “getting to know you” puppy kisses, I waited for the punchline.

The look on his face told me he was dead serious.

After having the new fluff ball at home for a few hours I knew he was right – and I was about to embark on an adventure through the twilight zone that I had never expected with a dog.

Shasta ate grass. I’m not kidding – she ate it.

I’m not talking about the occasional nibble as if she had a bellyache – you know, the old wives’ tale about dogs and grass.

Nope, the puppy was out there chowing down my lush green lawn like a kid with an after school snack of chocolate chip cookies and no homework. All day, every day. Grazing away like the cow she wasn’t.

Was there something wrong with her? Was she sick? Was she hungry?

Or worse – was my puppy really a vegetarian?

So, the hunt was on for an explanation to solve the canine mystery we’ve all encountered – why does our dog eat grass?

Are Dogs Carnivores or Herbivores?

Actually, our four-legged furbabies are both.

The correct term is omnivore, and this is an unpopular fact that has been proven through various phases of scientific study, as well as genetic markers in the domesticated Canis Lupus Familiaris, as well as Canis Lupus – the wild wolf.

So, although they commonly considered steadfast carnivores, studies are more and more supporting that both dogs and wolves alike are omnivores.

Clearly, canines are preferential carnivores. Heck, if given the choice between a thick, juicy steak or a grilled chicken breast, and a bowl full of boring field greens – which would you choose?

It’s the same with dogs. They go for the meat every time.

A cursory look inside the mouth of the beast shows dentition perfectly designed to rip and tear – trademarks of a carnivorous bend. But that doesn’t mean there is no need for vegetation in their diets.

Heck, studies show that even wolves have been known to seek out and ingest the various berries that their dinner from the previous days had snacking on. This fact, that seeking vegetation of various kinds to supplement their diets, in itself is proof of the omnivorous nature of the beast.

Unfortunately, another problem with identifying canines as omnivores is that it goes against the current fad of “grain free” diets that are becoming more and more popular – as well as the resurgence in “raw food diets“.

Rather than go into the benefits or evils of grains – and other so-called “fillers” –  or open the Pandora’s box of debating raw versus kibble in our dog’s daily nutritional plans, we’re going to focus on the vegetation en masse.

So one scientific – and practical – reason about why dogs eat grass and other leafy greens, fruits, and vegetables, in addition to their chicken and beef, is that it’s in their DNA.

Vegetation, along with quality meat products, are both components of a balanced diet. And besides – they like it!

But we’re still left with a question – is grass bad for my dog?

Should I Let My Dog Eat Grass?

Okay, since we’ve established that eating grass isn’t the end of the world – it still doesn’t answer why my beautiful little husky is cross-dressing as a billy goat. So let’s take a look at some of the why’s that could be rational explanations;

Just like you and I get food cravings that can be indicative of a missing nutrient from our daily diet, the same can be said for our canine companions. And while we can grab a handful of potato chips to get a little sodium boost, it’s different for Fido.

We do the best we can to make sure they have a balanced diet – and that includes the occasional yummy treats – but every now and then they need a little extra. And since it’s programmed into them, they know just where to look.

Grasses not only add roughage to aid in digestion (dogs can’t process the grass), they can add various other minerals – as well as quick rehydration on hot days or after rough and tumble play.

The common explanation for dogs eating grass is because they’re sick and need help to get whatever is ailing them out of their system.

But in reality, it’s been proven that only a small percentage of dogs vomit after eating grass, and even then the general consensus of research veterinarians can’t agree if it is a driving force to seek out and eat grass for the gastrointestinal relief, or a learned pattern of behavior – or simply a coincidence.

If your dog is sick, he’s gonna be sick – grass or no grass. And like every other dog owner on the planet, nothing can rouse me from a dead sleep in the middle of the night like one of my dogs about to get sick on the carpet.

Speaking of things that go burp in the night … I don’t mean to gross you out here – but are you sure your little angel is eating grass?

Stop and think of the potential nasties that could be hiding there, enticing Fido. Another dog’s scent. A parting gift leftover from a rabbit passing through. Remnants from last night’s chow that still smells so yummy.

What Can You Do About Your Grass-Eating Pooch?

Well … Just like in every other realm of life, you’ve got options available.

First things first, identify what’s getting eaten – and why.

Yeah, we just covered why dogs might be eating grass or other leafy stuff, but have you done your homework? Do you know why your pup is eating the grass? Or should we say – do you know what your dog is actually eating?

That’s a pretty big key to deciding what to do about it.

Figuring out the what in the equation is key, and then the answer why will be pretty obvious. Just open your eyes and watch. Look at where he stops and watch what he does. 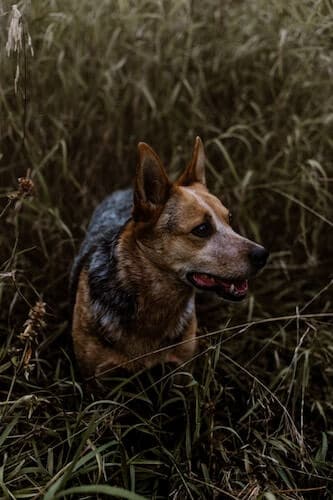 Nonchalantly walk around the yard while your dog is sniffing out a spot to make a deposit, and pay attention to his actions and reactions.

Is he looking for specific grass or leaves to eat? Is he sniffing and gently licking? Is he uncovering a dainty morsel to devour? Is he heading directly to the previously digested dinner for a second helping?

If it’s traces of scents your pup is going after, say from a neighborhood dog remarking territory, that’s easy enough to handle.

A short conversation explaining the problem and asking the dog’s owner to walk across the street, or not allowing them to stop along your property line should suffice; most dog owners understand some of the quirkiness that comes with the leash and collar.

Rinsing the spot on a daily basis works as well – especially if you can catch it as soon as the offender completes his rounds. You can also try a soap-suds rinse; it will eliminate not only the offending odor but discourage remarking.

“Tootsie rolls” are a common delicacy – and the fresh ones even more so. Again, this takes a respectable amount of vigilance on your part to identify and eliminate (no pun intended) the temptations. The first step could be keeping a close eye of Fido as he wanders the yard to identify the offender.

If it’s from a rabbit or other wildlife, then consider rabbit fencing to reinforce any areas that the bunny might be slipping through, or even wildlife sprays. A few nights of the offending fragrance will curtail the wildlife from crossing into your territory.

If you find that your dog is recycling his own “tootsie rolls”, that will take a little more effort to correct. Dogs re-ingest food for three primary reasons:

1. The food is still yummy. That means there’s undigested goodness in abundance. If this is the case – and your dog is not absorbing all the available nutrition from his meal – then it’s time to look at a change in food.

2. There’s a nutritional need. Just like we crave what our bodies need, there might be nutrients in the waste – whether his own or another animal’s – that he needs. This takes more consideration, and perhaps a trip to the vet to ensure his nutrition is where it should be.

3. Compulsions occur in our four-legged friends just as easily as they do in us. If there is no rational explanation – or you find that your little bundle of joy is eating poo indiscriminately, then it is time for a serious intervention. 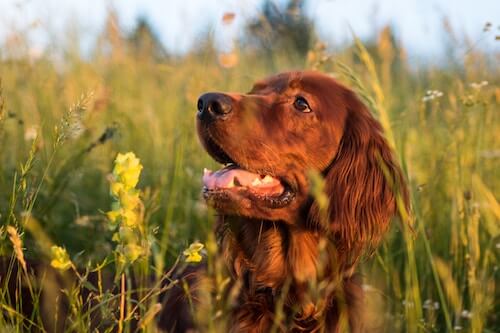 Training, as well as physical aids such as muzzles can eliminate eating the non-food items. Proper dog training can also be very effective. If it’s serious, your veterinarian can add a medicinal component to change the behavior.

If you discover it’s really just about the sweet, succulent grass or plants, you can simply let nature take its course and let your dog continue to eat grass. It really won’t hurt anything.

One small caveat: if you use any weed or pest control chemicals, you will want to discontinue them – these chemicals can be dangerous when ingested.

Also, get a book – or scour the internet – and eliminate any potentially toxic plants and weeds.

Lastly, you can take steps to eliminate the draw of the offending vegetation altogether.

Okay, so you’ve decided that you’re taking grass off the canine menu. No more vegetarian diet for you. Now you need a plan. And patience – lots and lots and lots of patience.

Basically, if you don’t want your dog to eat the grass – you eliminate the grass.

See how easy that was?

Information is knowledge – and knowledge is power. Filling in the blanks can not only help you understand what he is eating – it can help you avoid it.

Another way to deal with eating grass without turning your backyard into a rock garden is with discouraging sprays and scents. These chemical-based sprays can be either bitter tasting, or an acrid odor that repels dogs altogether.

Although they can be quite effective, they can be expensive between initial purchase and reapplication after the rain washes them away – or they can be more dangerous because of their caustic make-up that repels or gives a bad taste.

The truth is that while eliminating grass from their diet is possible – it really might not be all that practical once you’ve weighed out the options.

Should I Let My Dog Eat Grass? Probably

When it comes right down to it, our pups are pretty smart. If they pick up a strange new habit, it’s a good idea to look into it and ask why – but if it’s not hurting anything, maybe the best action is to just let it run its course.

Shasta? Yeah, she still eats grass. I’ve made sure that we no longer treat for weeds and grubs in the yard, and I’ve even taken to planting some of her favorites in a small area just for her. She rolls all through them and munches away to her heart’s content.

But she is also getting a good, solid diet rich in meat, minerals, and vitamins.

My puppy is not going to be a vegan.

How to Clean a Dog House