Can You Use Neosporin on Dogs? 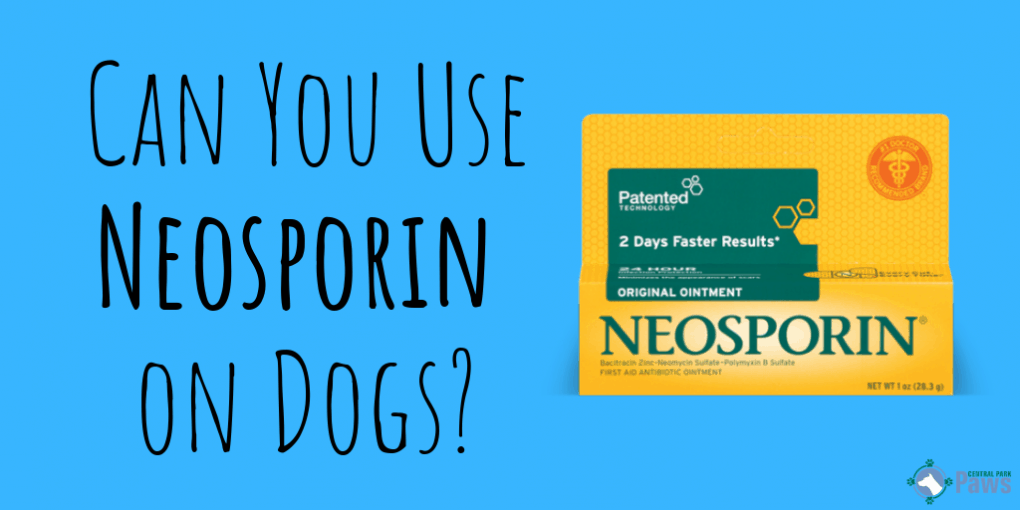 Dogs can get into some sticky situations that end with them bounding away from their fun with little cuts and scrapes.

While the injuries may not be anywhere close to life threatening, they can still result in infections, like any other wound.

I had to look into this issue when I brought my dog Maggie home with me over the holidays. She was roughhousing with a puppy friend, who accidentally scratched Maggie’s nose.

To make sure Maggie stayed healthy, I read about using Neosporin on dogs

Is it possible and will it help?

Here’s what I found out. 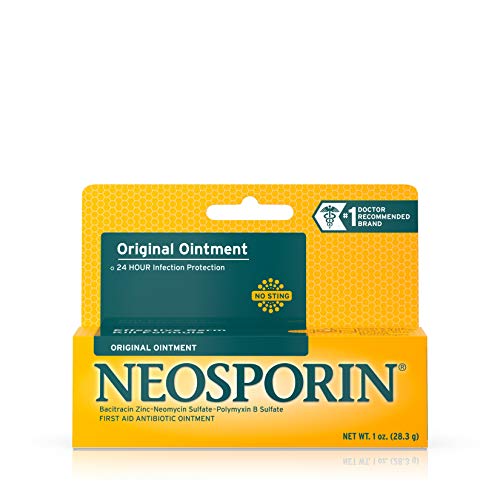 Neosporin is a topical ointment that people put on cuts to prevent infection.

It contains antibiotics that will treat and prevent infections caused by bacteria in wounds and burns.

Bacitracin is another ointment that can be applied to wounds to prevent bacterial infections.

While it’s great with wounds, it won’t prevent fungus or virus infections and can become less effective if used frequently.

Yes, Bacitracin is commonly used to treat wounds in dogs.

It’s gentle and effective, without irritating the skin or fur of the dog.

Neomycin is an antibiotic that isn’t easily absorbed by the body.

This means that it’s perfect for both topical treatment of infections and oral doses that go straight to intestinal infections. 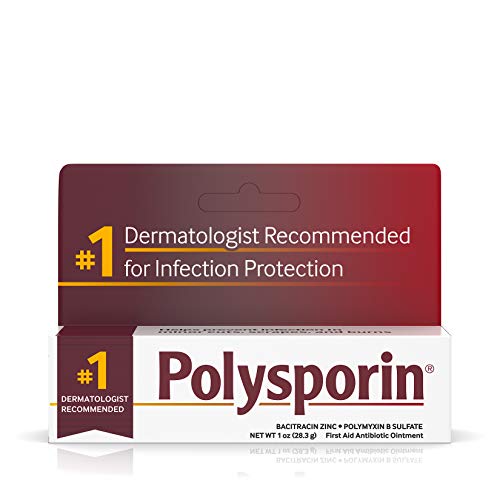 Yes, Neomycin is an antibiotic that is used and prescribed by vets.

What is Polymyxin B?

Polymyxin B is an antibiotic that has a high toxicity rate in large amounts, so it’s typically only prescribed to dogs to fight intestinal infections. It’s also found in eye drops.

It doesn’t absorb into the body and is a powerful way to fight bacteria.

Yes, a vet will prescribe Polymyxin B to dogs with intestinal infections or those who need to fight eye or eyelid infections.

Has your dog prescribed one of these antibiotics but you can’t get your dog to take its pill? Read here for helpful tips!

Can You Put Neosporin on Dogs?

When your dog gets hurt, it’s natural to want to start to care for them right away.

If you find yourself reaching for your trusty tube of Neosporin, the consensus is that you may be able to use it for their injury unless your dog is allergic or it’s a large injury.

The first thing you should always do when your dog gets hurt is wash it with soap and warm water.

I dabbed Maggie’s nose with a warm, damp wash cloth that had a bit of soap on it to better clean the cut.

Then you can apply a small amount of Neosporin on the wound.

Leave it on for at least a few hours, so the wound has a protective layer against any further bacteria.

It’s important to monitor your dog after you’ve administered the ointment.

If they break out in a rash around the applied area, wash the wound free of Neosporin immediately. They may have an allergy!

Are There Alternatives to Neosporin for Dogs?

You may feel uneasy about putting ointment meant for humans on your dog, and that’s okay!

There are other all natural solutions to protect your dog’s wound from infection.

Honey is naturally an antibiotic because it has a built-in resistance to bugs. It also has hydrogen peroxide, which helps draw out any infection while the rest of the honey kills bacteria. Manuka honey has additional antibiotics, such as methylglyoxal.

Used by natural healers throughout time, yarrow is a weed that fights bacteria and calms inflamed skin. It can be ground up, put in water, and sprayed on a wound or even given to dogs as a steeped tea.

Plantain is another naturally occurring plant that is anti-inflammatory and speeds the growth of new skin cells. The allantoin in plantain will draw more white blood cells to a wound and make the healing process faster. Mix with coconut oil for an easy ointment.

Is Neosporin Safe for Dogs’ Eyes, Ears, or Paws?

Big or small, keep the Neosporin out of your dog’s ears

Neosporin is meant to be applied to the outside of wounds, so it should never be put inside your dog’s eyes or ears.

Eyes will only further be irritated by the thick ointment. Call your vet for recommendations about eye drops instead.

Ear infections are usually caused by some kind of environmental allergen.

Bugs or parasites, such as mites, may become lodged in your dog’s ear by an increased production of ear wax or even excess water.

Clean your dog’s ear out before worrying about further infection. Then you can tackle the infection, though other methods than Neosporin are typically recommended.

Want to learn how to clean out your dog’s ears? Click here!

What to Do if Your Dog Eats Neosporin

If your dog has licked an area where you applied a small amount of Neosporin, they aren’t at any great risk.

The only time you should be concerned is if they find their way into an entire tube.

Double check that they’ve only managed to eat the Neosporin itself.

The ointment is made of mostly petroleum jelly, which will upset their stomach if eaten in large quantities. Any nausea, vomiting, or diarrhea should pass after 24 hours. 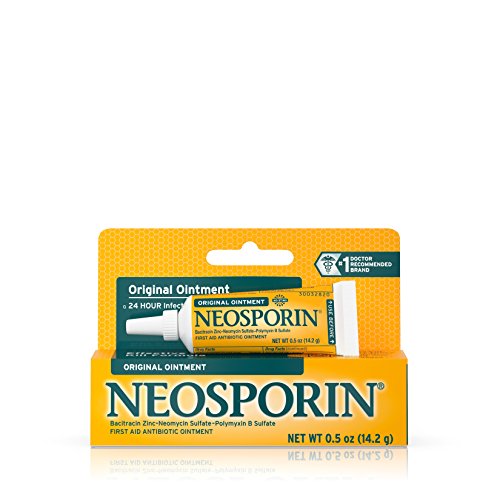 Though, you CAN get a “bite-sized” tube of Neosporin…

In fact, petroleum jelly is used when you want a dog to, ahem, get rid of something they’ve eaten.

The only time to become concerned is if they’ve eaten the plastic tube or cap the Neosporin comes in.

If they chewed the tube up before swallowing, you can feed them bread slices to catch the small pieces and help them safely pass through the digestive system.

If you’re sure they swallowed the tube whole, there’s a risk that it may block the digestive system and cause more drastic issues.

Call your vet if you’re not sure and they can run tests to determine how best to help your dog.

The next time Maggie finds herself getting scrapped up, I’ll grab my Neosporin and some bandaging materials so she doesn’t lick it all off.

It’s good to know she won’t be at risk of infection, even if I end up preferring to go with something all-natural.

Is it OK for a Dog to Lick Neosporin?

Yes, if the Neosporin has been applied in a small area, it’s okay for a dog to lick it off.

Make sure to bandage any areas where Neosporin has been applied so they don’t continuously lick it.

Is Neosporin Toxic to Dogs?

Technically, no, but it’s still not good for them to eat a large amount.

They could deal with symptoms such as vomiting and diarrhea, or even intestinal blockage if they eat the Neosporin tube.

Always call your vet if you have any concerns about what your dog may have eaten!

How to Choose the Right Dog Bed for Your Dog

By Mark
About the author