How to Treat Ear Mites in Your Dog

Maggie has gone through a few phases where she’s either enjoyed snuggling or needed some space.

During one of her most recent snuggling phases, we were curled up on the couch together to watch a movie, and I noticed something was off.

When I rubbed around her ears, my fingertips came back with dark discharge.

She gave me a big grin as I leapt up to wash my hands. I’d like to say I kept my cool, but there may have been a bit of shrieking involved.

By the time I got back to the couch, she was scratching at her ear like she wanted to dig a hole.

After some quick researching, I learned that ear mites are a thing and that Maggie probably had them.

Here’s what I learned and how I jumped right into making them go away.

What are Ear Mites?

Ear mites are a type of arthropod and are related to ticks. Photo by Daktaridudu (CC BY-SA 4.0)

They’re basically my worst nightmare in terms of how gross they are.

Ear mites are arthropods known as “otodectes cynotis mites“, and they’re a frustrating bug to fight.

You’ll never be able to see them just by looking at your dog’s ear. All you’ll see is what I saw, which was discharge.

Ear mites are microscopic and have eight legs. Yeah, you read that right.

They lay eggs all over the place and hatch up to twice a month.

While they don’t burrow under the skin, they’ll eat oils and buildup in the ear canal and still cause high levels of irritation.

Do you see discharge in your dog’s ears that’s not from ear mites?

How Do Dogs Get Ear Mites?

Ear mites hang out on the surface of a dog’s skin when they’re not making themselves at home in an ear canal, looking for a new host to jump to.

They’re extremely contagious, so while a dog may pick them up from running around outside, they probably got them from the last dog they hung out with at the park.

How Do You Know Your Dog has Ear Mites: Symptoms and Signs

The first sign that your dog may have ear mites will be constant scratching.

Maggie had been scratching at her ears for a few days before I noticed the discharge, so it may not catch your eye at first.

When the mites have been living in your dog’s ear for a while, the dark, reddish-brown discharge will appear. The color looks like dried blood, but the discharge looks like old coffee grounds.

I skipped my usual cup of Joe the next morning.

What are Ear Mite Complications?

Any health complication with your dog should always be taken seriously, even if the issue is lower on the danger scale like ear mites.

If left untreated, ear mites can cause some huge problems.

Dogs often shake their heads to get rid of ear mites, which can cause neck issues and ear canal damage.

Dogs can also develop serious infections, since ear mites carry bacteria. Infections that are left to grow may cause permanent ear damage or hearing loss.

How to Treat Ear Mites in Dogs

Thankfully, ear mites themselves aren’t fatal, so you can try a few home remedies if you’d rather not go to the vet.

Some of the ingredients you’ll need may already be in your home. 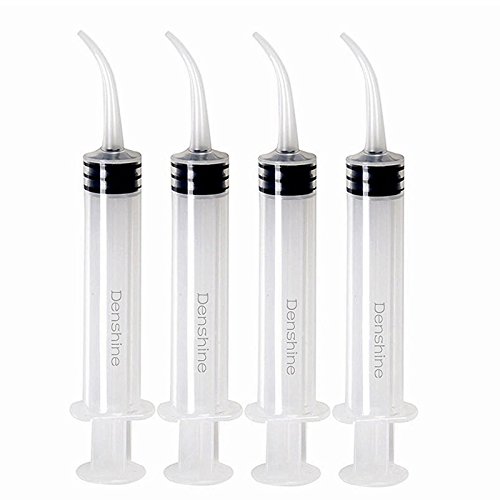 The most basic way to remove ear mites is to flush them out, but don’t head to the sink just yet.

While water could flush out the mites, there’s nothing in it to fight potential bacteria that could be spreading.

Apple cider vinegar makes quick work of both mites and bacteria because it has acetic acid.

Use a syringe and squirt a tiny bit into the mite infested ear, and clean the ear flap with a soaked cotton ball.

Avoid using vinegar in any ear that’s red and sore, since it will cause a painful burning reaction that will hurt your pup.

Hydrogen peroxide is a remedy for only the calmest of dogs.

With one wrong squirt, it could burn their eyes, so avoid using a syringe for this one.

Instead, soak a cotton ball and dab the ear until all the debris is removed. Lay your dog on their side for the best cleaning angle with this solution.

Once your dog’s ears have been cleaned with a bacteria fighting solution, you can rub aloe vera over any inflamed skin.

It’s a naturally healing gel that you may have used on your own sunburns before.

Your dog will appreciate how it cools inflamed or irritated skin. 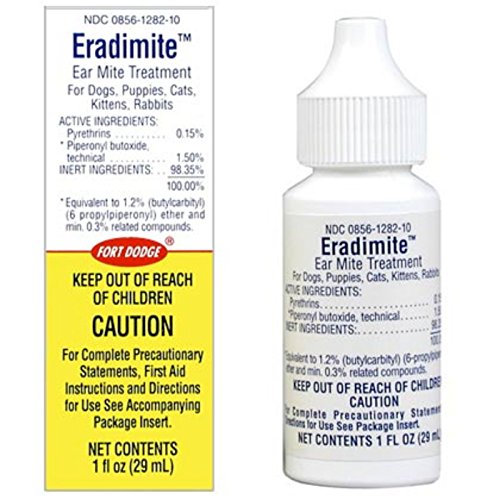 Vets can prescribe medication to dogs who have severely irritated or infested ears, but you can also find some over the counter medications.

Otomite Plus and Eradimite Ear Mite Treatment can take the place of vinegar or hydrogen peroxide as a cleaning agent.

They’re made to specifically target the most common bacteria that ear mites carry, so they’ll get the job done.

How to Prevent Ear Mites

The best way you can prevent ear mites is to clean your dog’s ears regularly.

Give them some love and attention once a week by swabbing the ears with your preferred cleaning solution, whether it’s homemade or an enzymatic otic such as ZYMOX.

A little attention will go a long way in preventing ear mites.

Try timing your cleanings with dog park trips or social visits, since ear mites are most contagious from dogs who already have them.

Besides her scratching, Maggie acted like she was fine, so her ear mite infection wasn’t too bad. I was able to clean her ears every day for a week to guarantee that the mites were gone.

As an added precaution for my own sanity, I ended up washing all of her belongings.

Her dog bed went in the washing machine, as well as her favorite toys. Anything she’d recently laid down on or cuddle with got a thorough scrubbing.

Now that I know how ear mite infections start and what they can become, I make an extra effort to check the ears on all my dogs regularly.

They enjoy the attention and the occasional treats when their ears turn out to be mite free!