How to Trim a Puppy’s Nails 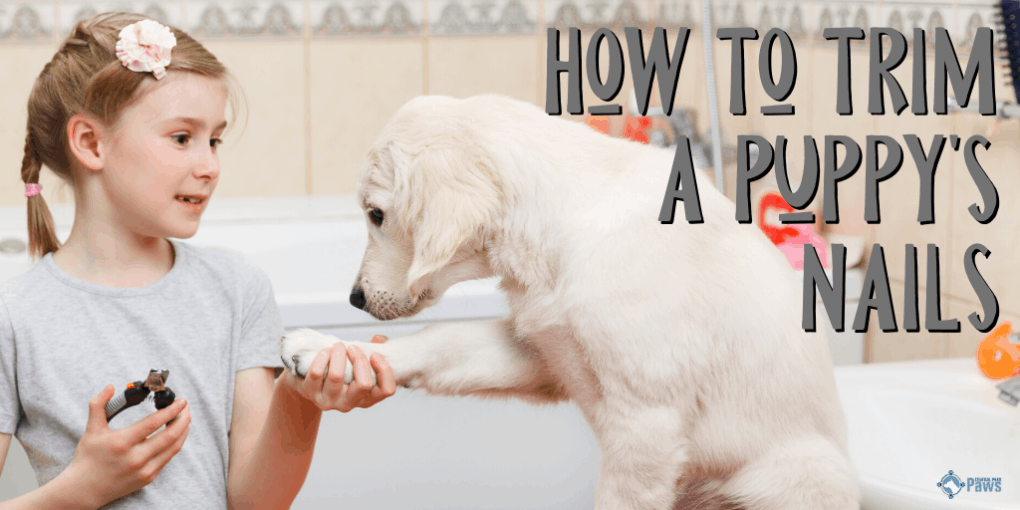 Some people have no problem with trimming their dog’s nails, but I was not one of those people.

My stomach flipped with nerves when I thought about trimming Maggie’s nails, especially when she was a puppy.

I loved taking her baby paws in my hand to feel their soft pads, but the thought of clipping her little nails and hearing her yelp scared me.

How was I supposed to know where to clip and how to hold her still?

Trim your puppy’s nails safely and correctly by reading these easy tips.

You’ll soon learn what I discovered—trimming your dog’s nails is much easier than you might assume.

Show Them the Clippers

It’s about time for this pupper to get those claws trimmed!

Puppies are typically interested in anything new, but they may be wary around things that make noise like scissors or nail clippers, and especially nail grinders.

They need to be calm when you clip their nails so they don’t jump and accidentally get the nail clipped too close, so show them the clippers as often as you can.

Lay the clippers on the floor and let your puppy sniff them. This shows them that the clippers are harmless and nothing to be scared of.

When your puppy doesn’t show signs of anxiety or fear around them, gently open and close them to create the clipping sound.

Give your puppy time to get used to this sound as well, practicing this technique every day.

It’s part of desensitizing puppies to clippers[1], since they look and sound different than anything your pup normally interacts with.

When they aren’t bothered or interested in the clippers or the clipping noise anymore, it’s safe to say they aren’t afraid of them.

Distract Them With Peanut Butter 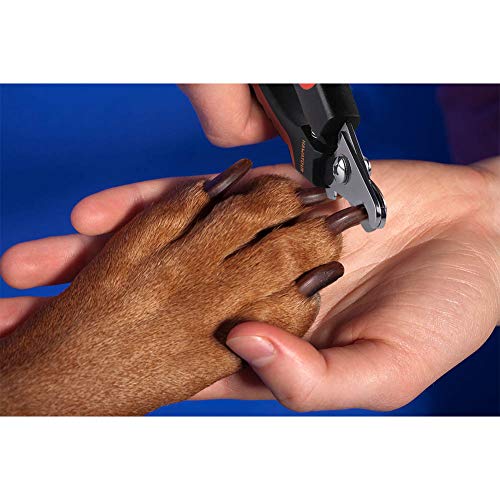 Bribe them with peanut butter enough and your dog will want you to trim their nails!

Even after your puppy is used to being around or hearing the nail clippers, they may panic when they’re forced to sit or lie down on their back against their will.

These positions make it easy to access and clip the nails, but your puppy may feel panicked when forced to sit in a certain position.

An easy way to calm down your puppy if this situation occurs is to swipe a bit of peanut butter on your fridge.

Have them sit down in front of the peanut butter and lick it off while you locate and clip their nails.

They may still squirm a bit, but the powerful scent of the peanut butter should focus them enough that they stay in position.

The quick was the part of nail clipping that freaked me out the most.

How is someone who hasn’t been to veterinary school supposed to find it and avoid clipping it?

For new puppy parents, the quick is the part of the dog’s nail that’s made of tissue. It’s similar to when you clip your own nails and accidentally cut too close to your nail bed, drawing blood. 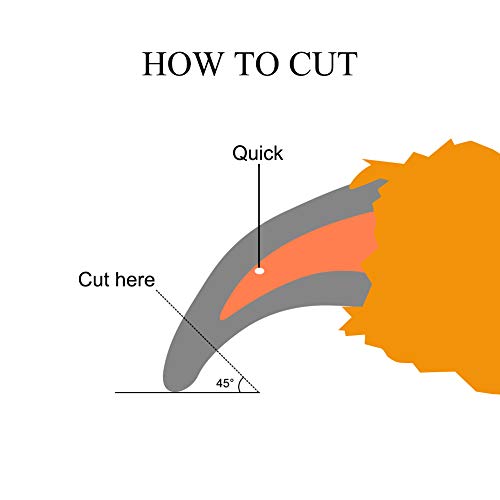 Clipping the quick in your puppy’s nails is extremely painful for them and results in continuous bleeding, since it’s a location with many veins.

You can identify the quick in each nail by looking for the darker section in the curve of each nail[2]. Shine a light underneath black nails to locate where the lighter nail is closer the tip.


Cut the end of each nail at an angle that matches the curve of the nail.

It should be fairly easy to clip away, since puppy nails haven’t had time to grow and strengthen.


If you’re still unsure about where the quick is, try clipping your puppy’s nails in tiny pieces.

After every clip, look under the nail for tissue. This usually appears as a bit of white under the nail, so it’s especially helpful for dogs who have dark nails.

Once you see the white, don’t worry about clipping any further.

Now that you know how to locate the quick in your puppy’s nails and get them used to the clippers, you should feel comfortable moving forward with the actual clipping.

That wasn’t the case for me.

It still rolled my stomach to think about hearing the sharp clipping sound, which is when I started looking into different clippers. 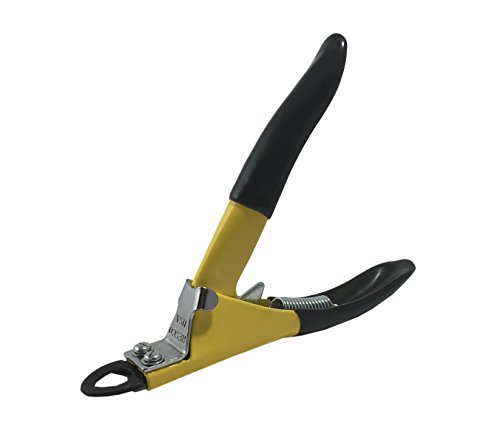 Being named after the guillotine doesn’t exactly do much for nerves, but I promise this is a safe option for clipping your dog’s nails.

The bonus of using this kind of clipper is that it makes less noise, so if that freaks your puppy out, try these clippers next time they need their nails taken care of. 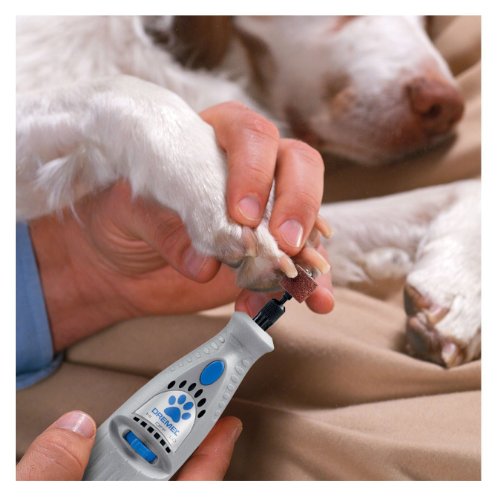 If you haven’t tried a nail grinder out, it’s the perfect way to ease into puppy nail clipping.

You press your dog’s nail gently against the grinder once it’s turned on and let it shave away.

You can read about the pros and cons of grinding your puppy’s nails, but it’s simple to try and easy to use on most nails. 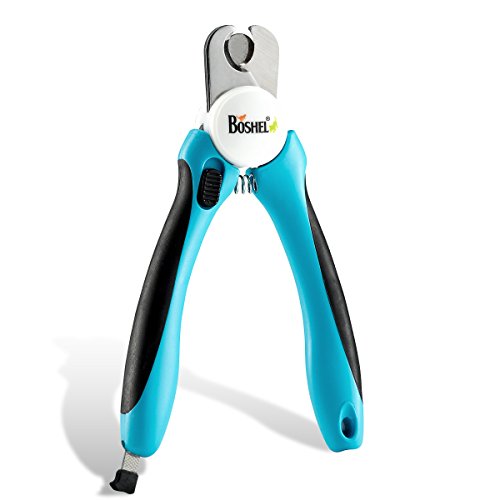 Scissor clippers are more hardcore, so if your puppy is a breed that grows over fifty pounds or more, you may want to practice with them for later on.

They’re made in the same style of guillotine clippers, but they’re made for more heavy duty nails.

You can buy them online or at any pet store, since they’re one of the more common ways to clip a dog’s nails.

The dew claw is what’s generally referred to as a dog’s thumb[3].

It’s the nail slightly farther away from the paw than any other nail, which is easy to miss when your puppy has long, thick fur.

Clip the dew claw the same way as any other nail.

Make sure to cut at an angle and avoid the quick at all costs.

Ask Your Vet For Help

As always, it’s a good idea to ask your vet for help if you’re still anxious.

I asked Maggie’s vet for a demonstration when she was going in for one of her puppy shots. They showed me what angle to clip at and how to find the quick, which was so helpful to see in person.

Go slow and steady during your puppy’s first at-home nail trimming session after they’ve become used to the clippers you want to use.

You’ll both get used to the process and you won’t have to worry when it’s time to pull out the clippers again in the future.

How to Clean a Dog House